USE THE WINGS OF BEAUTY! ~ 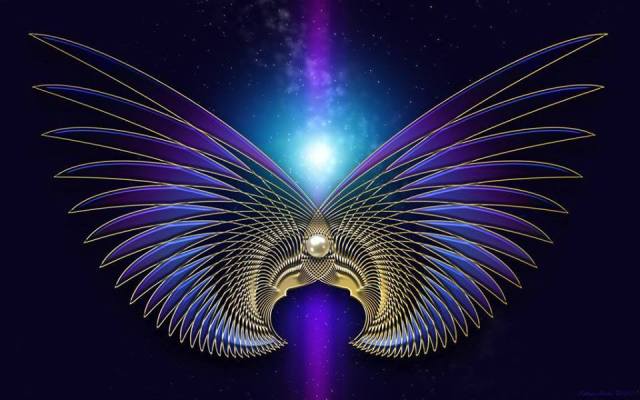 …Listen with your heart now into the newly arriving ethers that come from Source Itself. They carry the Secrets of Divine Origin which are now being Returned to you, as you listen.
This Is the beginning of your New World, in which feeling, listening and seeing are One, because there is no separation. Your senses have separated you from Truth and the Unity of Being….

WE ARE FROM THE DOMAIN OF FIRE AND LIGHT, OF ALL SOULS AND THE SACRED DIVINE CORE ESSENCE IN THE ANDROMEDA GALAXY.

Can you feel our Presence, as we are embracing the atmosphere of your planet, now every day more translucent to light ?

We are bringing good news as we are here as messengers of earth’s ascension. We are here to help you to transition into new possibilities of the human race which is about to leave behind the paradigms of a godless illusion.

We are here to support the Truth of a Bright Divine Reality to manifest, Who expresses Itself as Inherent Beauty in and of Everything that exists.

There is no Truth without Beauty, because the Divine can only manifest as Such. The deepest yearning of the human heart is the yearning for Beauty, because It speaks the language of the Silent Heart that gave Itself Permission to dive into the Depth of Pure and Pristine Awareness, free of the manipulation of a corrupt mind.

Yes, the mind of humanity has been manipulated for Millenniums, so much that it lost its capacity to Truly think and understand itself and the Divine. When the mind understands itself, it will surrender to its Source, naturally, because it knows its limitations.

Mind cannot ultimately know Beauty with the mere means of itself. And Beauty can truly only Divinely Self-Reveal.

We are now bringing the Reality of that primordial Beauty to your awareness, as you are now ready to receive It. It cannot be described, but can only be experienced and realized as your own Being-ness with a Pure Heart.

Beauty is the Source of Joy, and without Beauty, the Flower of Divine Love does not exist.

Listen with your heart now into the newly arriving ethers that come from Source Itself. They carry the Secrets of Divine Origin which are now being Returned to you, as you listen.

This Is the beginning of your New World, in which feeling, listening and seeing are One, because there is no separation. Your senses have separated you from Truth and the Unity of Being.

While you transcend your familiar perception of a dense and separate world, entering beyond of beyond into the ever-expanding Light of Divine Consciousness, use the Wings of Beauty to Be in an Instant, Where You always have Been, One with the Divine.

To understand our message requires of you to let go what you know, and to accept what you need to remember with your soul.

In a Divine World everything is Beautiful. And what is not, is not Divine. What talks in parts, is not. What talks with paradigms that are not in the flow, what does not submit to the Eternal Force of Now, but is attached to time and limitations, is not Divine.

Find Beauty in Eternity, because It Is Eternal. Eternally It Enlightens the Heart with the Intoxicating Scent of the Unspeakable. It breaks free from all confinement and left-brain definitions. It Radiates Otherwordly in Freedom through all appearances as Is.

The layers of appearance are there to be aware of Beauty, so that the Divine can recognize Itself. No longer confuse what arises, with That, in Which it arises!

Your Freedom is here, when you accept it!
We love you!

We Are the Light-Beings from the Andromeda Galaxy!